The 2015 PISA test cycle included a survey of principals. They were asked to report on the extent to which five teacher-related behaviours – including teacher absenteeism, teachers not being well prepared for class, and teachers being too strict with students – are hindering learning. Our latest infographic looks at the results from Australia and nine other countries. 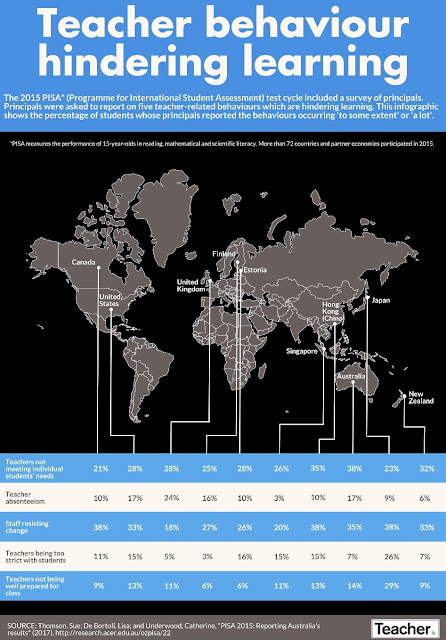 Posted by MathsRepublic at 21:52 No comments:

Students Don't Need to Know What to Think; But How to Think


For more than a century, educational institutions has been creating an industrial workforce of human automatons, built for the purpose of performing non-routine labour to Scott Santens, a writer with Reddit.

And we've been operating with the mindset that we should teach students the same way we program actual machines. This is the view also of renowned education guru Sir Kenneth Robinson presently so strongly in his talk relating education to the factory environment: https://www.youtube.com/watch?v=K9C0KNtqiHU

In the 20th century, schooling became a process of information upload in which students are to be filled with all the appropriate data and applications to function as cogs in the machinery of factories and offices, or in the parlance of today, as walking hard drives.

Modern mass production did more than increase efficiency. It chopped up work into simpler components in which one small task could be repeated day in and day out without thought and without knowledge of the whole.

Centuries ago, shoes were made by hand, by one skilled person who made the entire shoe. And then hundreds of people became involved in making one shoe with one relatively unskilled person doing nothing but attaching soles all day, every day.

Now that machines can perform all the tasks in making an entire shoe, what happens to the humans who were programmed to operate the machines?

To succeed in a world of automation will require being as unmachine-like as possible. The entire education system will need to be retooled around no longer teaching kids what to think; but how to think.

Memorization of facts is pointless in a world where everyone carries around the entire knowledge base of the human species on their person.

The teaching of creativity, curiosity, critical thinking, analytical thinking, problem-solving, and a love of learning itself will be critical to transitioning from the industrial age to the automated age.

Learning how to collaborate and empathize with others will be key. To be human is not to be a lone robot performing a singular task in a vacuum but to be a member of the whole of humanity contributing in countless interdependent ways, including even entirely unpaid ways. This will require nothing less than a redefinition of work itself.

To succeed in the future will require rediscovering what it means to be truly human. Mark Twain once said the two most important days in your life are the day you are born and the day you find out why.

In the decades ahead, our jobs as humans will be finding our ways to our "whys." And education must be re-imagined.

Posted by MathsRepublic at 23:46 No comments: